PEW PEW: The action in this film is gripping with plenty of emotional stakes. The series positively glows with, and is perhaps the greatest example of pure ‘pew pew!’

CAT FOOD: Lucas’ final vision of the corruption of the human heart and the falibility of political ideologies is surprisingly profound when compared to what we saw in previous films, if disbelief is properly suspended. The series is still more about its action and excitement than it is about social commentary. 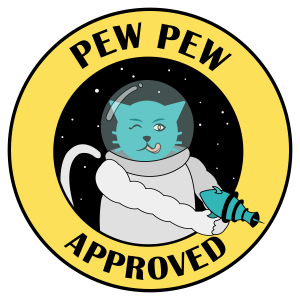 When we saw Attack of the Clones we quickly learned that it would be the next film that was the one we’d be wanting to see. Revenge of the Sith was going to be the film that documented the downfall of Anakin Skywalker, his turn to Darth Vader, the rise of the Galactic Empire, the extermination of the Jedi, and a return to where we were when we started the entire saga with 1977’s original Star Wars.

For what it’s worth, Revenge of the Sith did unexpectedly come through with all of this.

Now, because we dicked around too much with episodes I and II, and because we still have to fuck the dog in the senate for some reason, all of this awesome stuff had to happen in less than one movie and, consequently, it all happens at breakneck speed, detracting from its awesomeness significantly.

This, the best film in the prequel trilogy begins near the end of the three-year span occupied by the Clone Wars. Chancellor Palpatine has been kidnapped by villainous military leader General Grievous and heroes Anakin Skywalker and Obi-Wan Kenobi sweep in to rescue him. After Anakin kills the head of the evil Separatists, Count Dooku (at the clearly evil Palpatine’s request), the war is effectively over, with only Grievous and the Separatist leaders unaccounted for.

With the war mostly over, the Jedi Council becomes suspicious of the Chancellor and gives Anakin the duty of spying on him, which Anakin doesn’t like because he’s grown to respect the man. Obi-Wan, on the other hand, must find Grievous and put an end to the fighting.

The added kink in the plan is that Anakin’s secret wife Padme is now pregnant with their child and Anakin has been having premonitions of her dying in child birth. Over the course of the film, Palpatine uses this to very easily sway Anakin to join the dark side.

On the downfall of Anakin Skywalker and his turn to Darth Vader. We do see the man transformed from hero of the Republic to evil henchman, but it happens so damn fast and anticlimactically that it is almost entirely unsatisfying. It’s like ‘Holy shit, Chancellor, you’re a Sith Lord, the very thing I’ve been trained to eliminate, but fuck it let’s murder children.’ I get that Padme and his child’s potential fates weighed greatly on his decision to change, I just feel that this could have been better displayed had it happened over a longer period of time. The Clone Wars television series, when watched in its entirety between this movie and Attack of the Clones does help this considerably. Without this, however, my suspension of disbelief is shaken and it’s just tough to buy.

On the rise of the Galactic Empire. Yeah, more senate crap, but at least we get to see the senate pods used as projectiles. The transition from Republic to Galactic Empire is as fast and unbelievable as Anakin’s turn to Vader. It’s not entirely unrealistic, though, and I get what they were trying to say about how quietly democracy falls and how fascism can very easily sneak its way in in the face of tremendous fear and hatred. Again, it just happens a little to fast and disjointedly to be entirely convincing. Palpatine, too, changes from stern old man to ass-headed Sith Lord far too fast.

On the extermination of the Jedi. As fast as the above-mentioned events unfolded, they ain’t got shit on how fast the great and powerful Jedi fall. Order 66, buddy. Holy ex machina! I went my whole life thinking Vader hunted down and personally killed all the Jedi. It added to his badassery. But no, Order 66. Lame. The plus side is, we get to see a lot more of the galaxy while we’re watching apparently bad ass Jedi mowed down by apparently even more bad ass clone troopers.

On the return to where we were when we started the entire saga? Well, damned if the film didn’t at least come through passably well with this one. A friend of mine commented that the first time in the entire prequel trilogy where he saw any piece of the original trilogy’s aesthetic was when we get to see the inside of the Tantive IV again.

Three things that really satisfy me about where this film ends up are as follows.

The battle between Anakin and Obi-Wan. This is an incredible battle and the first time we see blue lightsaber on blue lightsaber. It’s an emotionally desperate duel, on par with the one at the end of Return of the Jedi. Obi-Wan doesn’t want to hurt his friend, but his friend seems hell bent on continuing the fight. It’s heartrending, and Ewan McGregor’s tremendous performance is one of the very best in the series.

The suit-up. When Palpatine discovers Anakin’s smouldering ruin, a very familiar black suit is prepared. One of the highlights in the series for me is when we get to see the helmet go on from Anakin’s perspective. The suction pop, the wheeze of the life support machine, and the very uncertain first breath through the mechanised suit — one of the most hauntingly satisfying sound sequences ever. I try to forget about the ‘Nooooooooooooooooo!’ that follows… When Vader takes his place by Palpatine’s side (Tarkin’s even there!) as the Death Star is being constructed, it’s quite the moment.

The binary sunset. After all is said and done, we see Bail Organa bring Leia home to Alderaan, peaceful for now, and to the sound of Leia’s Theme from the original score. But most importantly for me, we see a newly defeated, yet defiantly hopeful Kenobi bring the infant Luke to Owen and Beru Lars on Tatooine where they look to that same astounding binary sunset that Luke will in nineteen years with that same sense of the unknown — all to the tune of my favourite composition in all of the saga’s combined scores. A brilliant way to leave things for now.

Random statement of utter frustration: Both Hayden Christensen and Natalie Portman (with emphasis surprisingly the latter) damn near single-handedly ruin this entire film with their slipshod acting. I can’t even blame the script for the ‘Anakin, you’re breaking my heart’ facepalm moment, which Hayden tries to one-up later with ‘you underestimate my power!’

And what the fuck, lost the will to live?! Twins, man. Twins! Padme definitely wins the worst mother ever award.

So Revenge of the Sith isn’t the best thing ever, but it’s not bad by any means. It falls prey to a lot of the same problems as the first two prequel films and its pacing is terrible, but there’s a lot to like about it. I would especially urge a reading of Matthew Stover’s amazing novel adaption of the film, which explores the minds of the characters and adds new insight into the tragedy of Anakin Skywalker, the friendship and bond between he and Obi-Wan Kenobi, and the agony of being Darth Vader.

It feels like they finally got what episodes I and II should have been and tried to jam it all into one movie, which adds up to a fairly enjoyable movie that, while extremely rushed, makes a valiant attempt to atone for the mistakes of the previous two.